Get The Best Database Services In Stockton California

We provide data services to businesses and organizations in Stockton CA and all California cities. With over 3 decades of experience in the database business, you won’t find a company that can solve your specific database needs with higher quality service or better prices than Northwest Database Services. No matter what your specific need is, our team will find a data service solution to suit your situation. 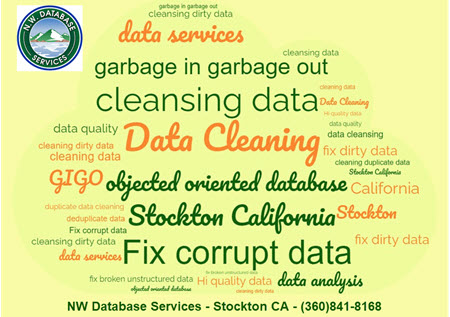 Why Is Data Cleansing So Important?

Data analysts will receive data from many sources. These data can come in many formats, and more often than you might think, will contain “dirty” information. They won’t be ready to be analyzed right away, so you’ll need clean them first.

What Is Dirty Data?

Dirty data refers to any data that must be altered or modified in order to be analyzed. There are several types of dirty data:

Incomplete data–for instance, a spreadsheet that contains missing values. This would not be useful for your analysis. Data for both customer age and monthly purchases is required if you want to analyze the relationship between these variables. You’re dealing incomplete data if you don’t have the customer ages.

Duplicate data is records that appear in the same dataset twice or more than once. If you combine data from multiple sources or databases, this can happen.

Inconsistent and inaccurate data – Data that is out of date or has structural errors like typos, inconsistent capitalization or irregular naming conventions. Let’s say you have a data set that contains student test scores. Some are categorized as Pass or Fail, while others are categorized as P or F. The labels are the same, but the naming convention makes it difficult to distinguish between them.

Knowing what type of dirty data you have is crucial as it will help you decide how to clean it. To determine where your cleaning efforts should be focused, spend some time looking at data you have received or collected.

Data Cleaning: Garbage in and Garbage Out

You may have heard the expression “Garbage in and garbage out”, also known as GIGO. GIGO is a term that stems from computer science and basically means that if your data is flawed, you will get flawed results.

Clean, high-quality data is essential for data analytics to be able to run meaningful and reliable analyses. You can’t analyse your data if you don’t clean them. You’ll be able to create something reliable, long-lasting, and strong if you do the data cleaning right. If you do it wrong or skip it entirely, your analysis will soon fall apart. Data experts spend 60% of their time cleaning data.

It is not only a bad idea to work with dirty data, but it can also lead to costly mistakes in the long-term. You need to feel confident when you present data analysis advice and draw conclusions. This is only possible if your data has been properly cleaned. 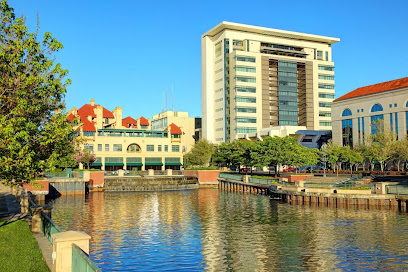 Stockton is located on the San Joaquin River in the Central Valley of California. It is the 13th largest city in California and is surrounded by waterways for miles. The city is full of museums, theatres, parks, arenas, a marina, and other unique attractions like the Wat Dhammararam Buddhist Temple and Little Manila. Stockton also hosts many festivals and annual events that keep the vibrant city exciting throughout the year. The diverse mix of attractions with relaxation services and fantastic entertainment makes Stockton one of the top cities to visit in California.

Stockton was founded by Captain Carlos Maria Weber in the year 1849 when he took over Rancho Campo de Los Franceses. Stockton is named after Commodore Robert F. Stockton to help win favor for the new town. Thus, it became the first community in California that did not have a Native American or Spanish origin name. The gold rush in 1848 led Stockton to grow from a small community into a busy commercial hub. Stockton was officially incorporated in 1850. People flock to Stockton from Africa, Asia, Australia, Europe, Canada, Mexico, and other countries. The growth of Stockton’s economy was mainly due to the farm produce and wines of Central Valley. The deep water channel completed in 1933 made the city a major port as well as a supply depot for US military operations. Since then, Stockton has grown into a city with a diversified industry.

Stockton has a warm and temperate climate. Summer starts at the end of June and usually ends in September. Winters are marked by rainfall and humidity. You will also notice fog forming early in the morning and during the night. The best time to visit Stockton is during the spring and autumn, when there are fewer chances of rain and fog.

Stockton has a diverse population, with Hispanics being the largest ethnic group living in the city (43.5%). The city also has a sizeable Asian (20.5%) and White (19.4%) population. Since homes are more affordable in Stockton than in the nearby cities of San Francisco, many people choose to move here. Thus, you will find young professionals, couples with kids, and retirees moving to the city.

The residents of Stockton rely on their cars for intercity travel. The main roadways include Interstate 5 Highway 99, which connects the city to Los Angeles, Fresno, and Sacramento. You’ll find many buses operated by the RTD or San Joaquin Regional Transit District. People use the buses to travel within the city and to other nearby towns such as Lodi. The bus system also connects with the Bay Area Rapid Transit System, which also services San Francisco. The Stockton Metropolitan Airport is small, and most residents prefer to fly in and out of San Francisco International Airport, which is just a couple of hours away, or the Sacramento, which is an hour away. You’ll also find Amtrak train services in Stockton.

Stockton was an agricultural town where farmers used to sell their own produce. However, with time, the economy of Stockton has diversified over the years, with agriculture still being the top contributor to the Stockton economy. Stockton’s other common employment sectors include Health Care & Social Assistance, Technology, Transportation & Warehousing, and Retail Trade. Some of the popular brands in Stockton include Amazon fulfillment centers, FedEx, Medline, Tesla Manufacturing facility, and Thermo Fisher Scientific, among others.