Get The Best Database Services In Santa Ana California

We provide data services to businesses and organizations in Santa Ana CA and all California cities. With over 3 decades of experience in the database business, you won’t find a company that can solve your specific database needs with higher quality service or better prices than Northwest Database Services. No matter what your specific need is, our team will find a data service solution to suit your situation. 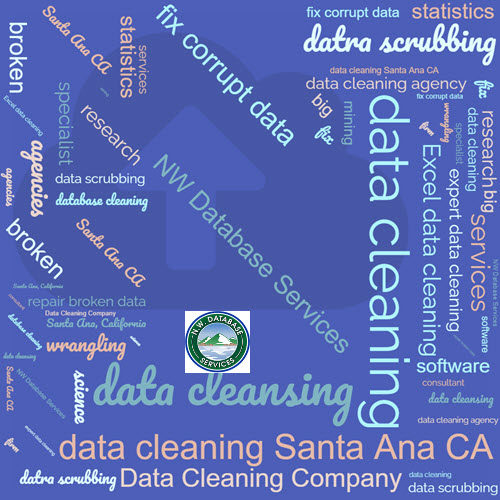 What Is Data Wrangling?

Data wrangling can be described as the initial stages of data analytics. It is the process of transforming and mapping data into other formats. This is done to make data easier for machine learning and business analytics. There are many tasks involved in data wrangling. These tasks include data collection, data cleansing, exploratory analysis and data storage.

Data wrangling can be time-consuming. It can consume up to 80% of data analysts’ time. Because the process is fluid, meaning that there aren’t always clear steps from start to finish, this is partly why it can take up to 80% of a data analyst’s time. It’s also because the process can be iterative and labor-intensive. You will need to consider the source(s) of the data and their quality. Also, the data architecture of your organization. Finally, what you plan to do with the data after you have completed wrangling them.

What Is the Importance of Data Wrangling?

The data wrangling process is a great opportunity to gain valuable insights. These insights will be crucial for the success of any future project. This step should not be skipped or rushed. It will lead to poor data models, which can impact the organization’s decision-making process and reputation.

Data wrangling can sometimes be misunderstood, which means that its importance is often overlooked. High-ranking decision-makers who are used to quick results might be surprised at how long it takes for data to be converted into usable formats. Contrary to the exciting results of data analysis, which often offer flashy and compelling insights, there is little to show for your efforts in the data wrangling stage. Data wrangler work is made more difficult by the time and budget constraints of businesses. This job requires careful management of expectations and technical know-how.

What Is the Difference Between Data Wrangling and Data Cleaning?

People sometimes use the terms “data wrangling” and “data cleaning” interchangeably. They’re both useful tools that convert data to a more usable format. They also share certain common attributes. However, there are important differences.

Data wrangling is the act of obtaining raw data, cleaning it and mapping it. It also includes the storage and retrieval of that data in a usable format. Data wrangling can be confusing because it is not always easy to understand. The term is used to describe each step individually and in combination.

Santa Ana was founded in 1810 by Jose Antonio Yorba, the Spanish governor of California. The Yorba family rancho was expanded after the Mexican War of Independence. It became one of the most important and valuable ranchos in the area and home to a wide range of California communities. The Sepulveda family purchased the rancho following the American Conquest of California. They lost their land claim. William H. Spurgeon purchased the rancho in 1869 and founded Santa Ana.

Santa Ana has a hot semi-arid climate. (Koppen : BSh). It experiences hot, dry summers and mild winters that are moderately wet. Average temperatures for the summer months of June through September are 83 degrees Fahrenheit (28.3 degrees Celsius) with a low at night of 63 degrees Fahrenheit (17.2°C). The winter months from December to March have an average daytime high of 70 degrees (21.degreesC) and a low at night of 48 degrees F (8.9degC). Average annual rainfall is 13.6 inches (345mm), with the majority falling between November and April. Each year, there are 36 days of measurable precipitation.

Santa Ana’s most prominent Hispanic ancestors are Salvadorian, Guatemalan and Mexican. German, Irish and English are the most common European ancestries. In the late 1970s, Santa Ana was becoming a hub for African-American families.

Santa Ana is connected to several areas in Orange County, Los Angeles, and beyond by a few freeways. Santa Ana Freeway (Interstate 5), runs north to Los Angeles and south to Southern Orange County and San Diego. The Garden Grove Freeway, State Route 22, runs near Santa Ana’s northern boundary. It connects Long Beach to its west and Orange to its east. The Costa Mesa Freeway, State Route 55, travels south towards Costa Mesa and then north toward the Riverside Freeway. This provides a connection with Riverside.

The Rickenbacker musical instruments company is one of Santa Ana’s most prominent businesses. Its electric guitars, and bass guitars have earned fame among many rock and roll icons.

Glenn L. Martin Company was founded in Santa Ana in 1912, before it merged with Wright Company in 1916.