Get The Best Database Services In West Jordan Utah

We provide data services to businesses and organizations in West Jordan UT and all Utah cities. With over 3 decades of experience in the database business, you won’t find a company that can solve your specific database needs with higher quality service or better prices than Northwest Database Services. No matter what your specific need is, our team will find a data service solution to suit your situation. 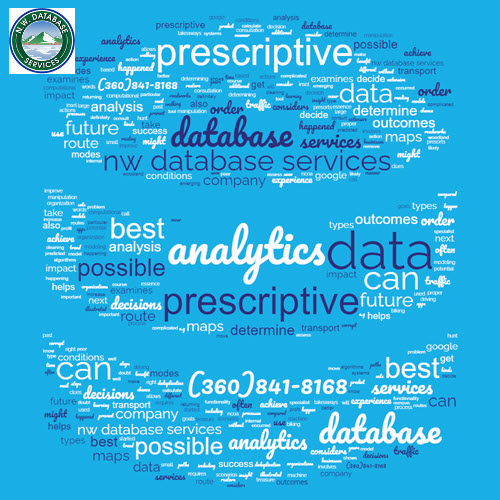 Prescriptive analytics examines what happened and why, as well as what might happen, in order to predict what the next steps should be. Prescriptive analytics, in other words, shows you how to best benefit from the future outcomes that were predicted. What can you do to prevent a future problem from happening? What can you do in order to profit from an emerging trend?
Prescriptive analytics, which involves algorithms, machine learning and computational modeling, is without doubt the most complicated type of analysis. A prescriptive model, in essence, considers all possible decisions or paths a company could take and their likely outcomes.
This allows you to assess the potential impact of different decisions and conditions on the future. It also helps you determine the possible impact of a particular decision. The company can then decide which “route” or action is best based on all possible outcomes and scenarios.

Prescriptive analytics is often illustrated by traffic apps and maps. Google Maps considers all modes of transport when determining the best route to get you to A. Google Maps will consider all modes of transport (e.g., driving, walking or biking), traffic conditions, and roadworks to determine the best route. Prescriptive models can be used in the same manner to calculate all possible routes a company could take to achieve their goals.

Data analytics can be compared to a treasure hunt. You use clues and insight from the past to determine your next move. All kinds of organizations and businesses can make better decisions with the right analysis. They can also use their data to improve their internal processes and increase their chance of success.

Get Professional Data Cleaning And Other Data Services

NW Database Services has 34+ years experience with all types of data services, including mail presorts, NCOA, and data deduplication. If your database systems are not returning poor data, it is definitely time for you to consult with a data services specialist. We have experience with large and small data sets. Often, data requires extensive manipulation to remove corrupt data and restore the database to proper functionality. Call us at (360)841-8168 for a consultation and get the process of data cleaning started as soon as possible. 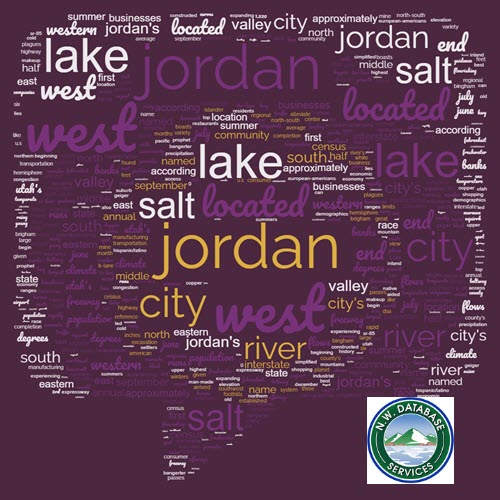 West Jordan is located in Utah’s Salt Lake County. It is located in a suburb of Salt Lake City, and boasts a mixed economic system. According to the 2020 Census, it had a population 3rd highest in the state at 116,961. At 4,330 feet (1.320 m) elevation, the city is located at the southwest end the Salt Lake Valley. The city’s boundaries are named after the Jordan River. They begin at the river’s western banks and end at the Oquirrh Mountains’ eastern foothills. This is where Kennecott Copper Mine is located, the largest man-made excavation in the world.

The name West Jordan was given to it by Mormon settlers who arrived in the Salt Lake Valley under the guidance of their prophet Brigham Young in 1847. The river that flows west from Salt Lake City was named by the first European-Americans, the Western Jordan. This is a reference to Jordan’s River Jordan. Later, the name was simplified to “Jordan River”. The Jordan River, like its Middle Eastern nameake, flows from an inland salt lake (Great Salt Lake) to a freshwater lake (Utah Lake). West Jordan was established on the western banks the Jordan River.

The climate in West Jordan is temperate and cold. West Jordan’s winters are more rainy than its summers. The location is Dsa by Koppen & Geiger. West Jordan’s average annual temperature ranges from 10.6 degrees Celsius to 51.2 degrees Fahrenheit. Annual precipitation is approximately 497 mm to 19.6 inches.
The location shown is located in the northern half of the hemisphere. The spot is located in the upper half the planet. The end of June marks the beginning of summer. September is the end. The months of summer are June, July August, September. July is the best month to visit.

Interstate 15, a 12-lane freeway, lies east of the city limits. It provides access from both the north and the south. Interstate 215, an 8-lane beltway, can be found northeast of the city. Bangerter Highway (State Route 154), a six lane expressway that runs through the middle of the city, is located east of South Valley Regional Airport. It also passes by the Jordan Landing shopping centre. A ten-lane freeway through the Mountain View Corridor (SR-85), with three exits, 7800 S, 9000 S and Old Bingham Hwy., is being constructed to alleviate the traffic congestion that plagues the rapidly expanding city. It runs north-south at approximately 5800 West in south, and curves west to 6400 West north. December 15, 2012 was the completion of the first phase.

With a variety of businesses and many restaurants, the city’s business community is flourishing. The city is experiencing rapid growth, which has led to a large number of industrial and manufacturing companies. Utah’s economy and consumer offerings are aided by the city’s community.